Sarma is an indispensable New Year’s first lunch classic. This year, in preparing this delicious dish with cabbage and minced meat with rice, you can try even anyone who may think you do not have enough skills in the kitchen. Do not worry: we present you a secret that will make the preparation of sarm fun. And above all delicious.

The old saying goes that what we do on the first day of the year will continue throughout the year. And if we start with a traditional dish, which above all symbolically brings happiness because of the ingredients, we have no reason to be afraid.

Have you ever wondered why we usually serve sarmas on the table on the first day of January? The reason is not only in their taste, but mainly in the two ingredients that according to the old tradition are supposed to bring happiness: cabbage and pork.

Cabbage is supposed to symbolize wealth and pork, which can be added to minced meat, brings progress. And these two foods are found in many household dishes around the world on the first day of the year.

Sarma is said to have originated in Turkey and in many versions appears almost throughout the Balkans. In some countries bacon is added to the mass, in Bosnia it is prepared only from beef and in Greece sarma is made mostly from vine leaves.

They also know their versions of sarm in Sweden, where they are called kåldolmar, or in Germany, where they are known as Kohlroulade. They are also being prepared in Russia, the Czech Republic, Hungary, the Middle East and even the United States. 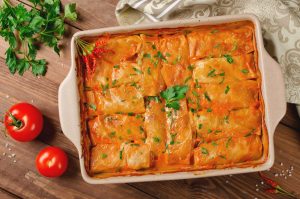 The first major advantage of delicious homemade sarma is that you prepare it in advance, as it gets even better every day. So, in addition to containing all those ingredients that would bring us a lot of happiness in the new year, it also has another advantage – on January 1 we will be able to enjoy high quality cooking at home without spending much time on. kitchen. So you should dedicate the day to the family and relax after a busy December.

And because you do not want to spend the last day of the year in the pot, we have a secret for you that will make it much easier to prepare the charms and at the same time offer you a winning taste – just like grandmas ours. in their dishes.

Without a careful choice of spices, their taste will not be as we remember it, so the mixture for stuffed peppers and Fant sarmas is the right help for the preparation of these dishes.

So for divine sarmas you need quality ingredients selected and a spice mix for stuffed peppers and Fant sarmat.

You can cook the sarma in a pot, place it in a baking dish according to our recipe and bake it in the oven. The result is truly amazing!

Preheat the oven to 190 degrees Celsius.

Mix the contents of the bag with 100 ml of lukewarm water and let it stand for a few minutes. Add 500 gr of minced meat and about 100 gr of rice to the prepared fanti and mix well. Fill the sarma with sauerkraut or fresh cabbage leaves with the mixture, removing the strongest parts first. 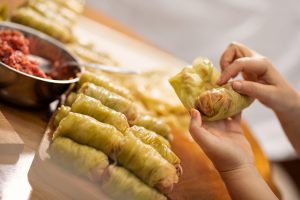 Cut the remaining cabbage into noodles and sprinkle half over the bottom of the pan. On them we place the prepared sarmas with the edge down. Place pieces of bacon between each sarma and then sprinkle with the other half of the sliced ​​cabbage. Pour boiling water over everything, cover with a lid and place in the oven.

Bake for about an hour and a half, check the baking process several times in the middle and shake the pan slightly if necessary.

Sarma can be served with tomato sauce and mashed potatoes.

Tip: instead of cabbage you can also use kale to make sarma, which in Denmark for example has a symbolic meaning similar to cabbage. 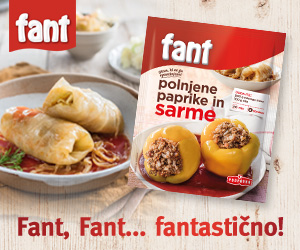 Not only for excellent sarma, Mr. mix Boy you can greatly diversify the preparation of a variety of homemade dishes. You can also use it for zucchini, eggplant or stuffed onions.

Undoubtedly, next year you will enjoy your summer cuisine as well, when another cult dish will return to our tables – stuffed peppers.

Philosophy Fant mix it is simple: to simplify the preparation of dishes and at the same time to bring to mind those authentic flavors we once knew.

Discover the modern way of cooking with Fant mixes.